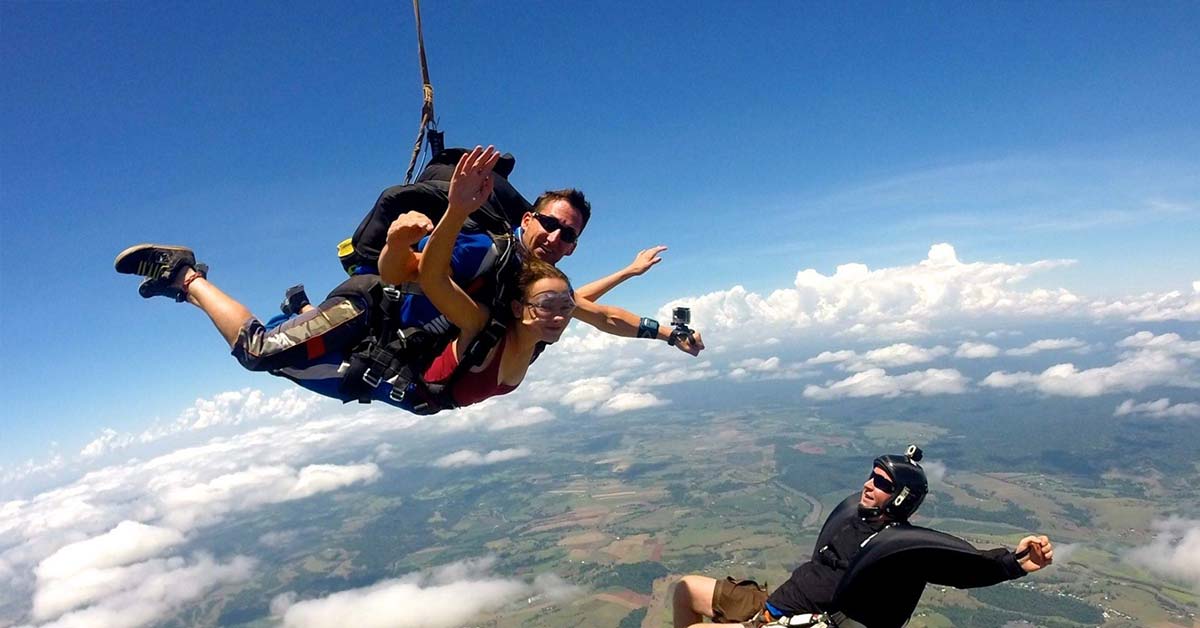 Skydiving is full of technical words and slang that can be very confusing for first-timers. We have put together a list of the 10 most common terms that you are likely to hear when you go skydiving in Australia or doing your AFF course to get your skydive licence. It doesn’t cover everything but it should give you a fairly solid base to have a good conversation with your skydiving instructor.

AAD stands for Automatic Activation Device. An AAD is a safety device that has saved thousands of lives over the last 30 years. It sensors altitude and speed. If a skydiver goes below the threshold altitude at high speed it will trigger the deployment of the reserve parachute automatically. Some situations when this could occur is if a skydiver loses consciousness in freefall or is unable to manually operate the gear.

Accelerated Freefall. AFF is the most common path to learn to skydive at most skydiving centres in the world. It replaced other systems like static line. With the AFF course students learn all the required skills to safely perform a skydive, from aircraft exit to deployment and landing of a parachute. Assisted by skydiving instructors from exit to deployment, the AFF course in Australia consists of 9 stages or levels.

“Altis” are one of the most important devices used in skydiving. We use altimeters to maintain altitude awareness throughout the jump. There are visual wrist altimeters, both digital and analog, as well as audible altimeters with pre-set alarms at different altitudes.

Speed of flight through the air, different to ground speed.

Bottom of container, where the pilot chute is placed.

To come out of a skydiving formation in order to build horizontal separation prior to parachute deployment.

The closing loop holds the flaps together once the pin is routed through, to keep the main parachute in the container, until the pin is released using the pilot chute.

Total weight of a skydiver when they leave the aircraft, their body weight plus all gear and equipment.

The line of flight followed by the aircraft when the door opens and skydivers start jumping out. It is expressed in degrees. So, a 45-degree jump run means the plane will be flying northeast. Jump run is planned based on the wind direction at different altitudes. It would normally place skydivers upwind, so when they are under the canopy they can “make it back” to the dropzone.

Prior to a skydive, all jumpers have to put their names on a list or manifest, so staff at the dropzone know who is going in each flight or “load”. The person working at manifest is in charge of coordinating the flights and skydivers taking part in each load.

Small round parachute that extracts the deployment bag with the main parachute.

Skydivers refer to the parachute system as “rig”. It is the full “backpack” which normally consists of a container, main parachute, reserve parachute and AAD.

The speed at which the drag produced by the relative air matches the pull of gravity, resulting in a constant fall rate.

The ratio of skydiver exit weight by the surface of the parachute. Weight normally in pounds and surface in square feet. So, for example, a geared-up skydiver that weighs 150 pounds and flies a 100sqft canopy has a wing loading of 1.5 lbs/sqft.